In Franckenberg's 'Key to the House of David', which I posted before, there's the following comment near the beginning:


"if you know in advance the Tetrachord or Quadriga of Apollo, then you will understand more easily and more happily without doubt, the science of  מרכבה (Merkabah), the Chariot of Isra-El"

For now I want to deal with his "tetrachord", the Quadriga of Apollo. Tetrachord is a combination of:


In music, a tetrachord is a series of 4 notes (which could be represented by 4 strings of different lengths, or 1 string divided into 4 parts. It should be noted that in modern
english the musical term "chord" is actually a shortening of "accord", in the sense of agreement - harmonious sound.

But what we are dealing with is the other chord, a straight line segment of a circle, with point ends on the circumference of the circle. The largest chord of any circle is it's diameter.

Apollo is "the Sun" (at least after about the 5th century B.C.E). A quadriga is a chariot, specifically a 4-wheeled chariot. The ancient Egyptians represented the heavenly bodies travelling across the heavens in boats. The Greeks and Romans pictured them travelling in chariots (the Egyptians didn't have the chariot until the Hyskos invasions/mass migrations).

It is important to remember that in the 'classical' sense, the "World" is not our planet Earth. The World is the universe, everything we can see, which can be visualized as extending from the earth in 360 degrees, with the sky forming a vault or dome over the land. The (apparent) path of the sun and planets around the Zodiac (ecliptic plane) are all part and parcel of this "World"

Now this tetrachord is some simple geometry of the "Straight-edge and compass": 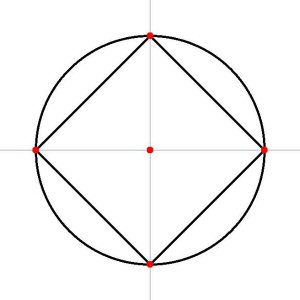 The circle represents the Solar Year. The 4 points are the "Four corners of the World", representing the Spring equinox, Summer solstice, Fall Equinox, and Winter solstice. These delimit the beginning of each season.  Connecting these 4 points differently gives the familiar symbol of the 4 spoke wheel, the Solar Cross: 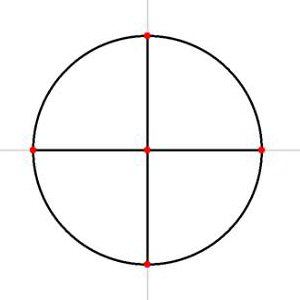 And that's the "Above". In terms of "Below", they become the 4 cardinal points of the compass, North, East, South, West.

From the original tetrachord, the structure continues: 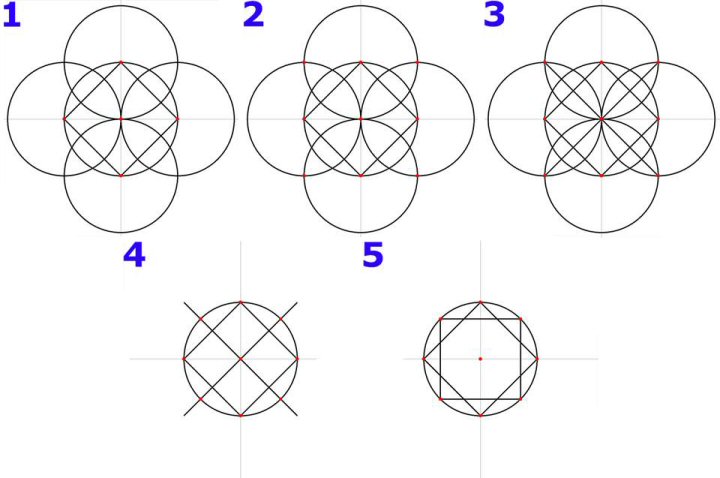 These four circles have in effect bisected the original 90 degree angles in the exact same manner that you would bisect any angle with the straight-edge and compass.

The corners of the new squares represent "mid season", particularly noticeable in Summer when the Sun will be at its most powerful. Like before, connecting these nodes on the first circle different gives the familiar 8 spoke wheel. Below, it adds the compass points NE, SE, SW, NW. Compasses sometimes have these 8 bisected again for 16, and sometimes those are bisected again for 32 compass points.  It's also the Dharma Wheel. 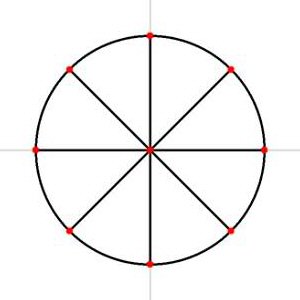 You may have already noticed that this was completed with 4 wheels (circles), like the Quadriga.

These is about all we need to understand the "Tetrachord or Quadriga of Apollo", but I'm going to continue this one step further, because it ties into a couple of things, one of them being.. more Franckenberg!

So to continue the construction, you would use the compass to draw four more circles at the last set of new nodes:

Now there's 3 rows of 3 overlapping circles, and in (3) I show the squares on the inside and outside of the central circle. This is the basic framework to construct the older, square style Horoscopes: 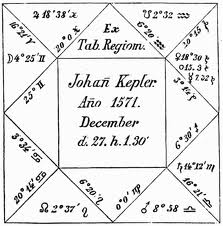 There's really no place left to go with this, the structure is complete. You could draw a big square around the outside of the circles, or a circle, but that's about it.

Here's the last bit for now: Franckenberg is better known for other images, plates from one specific printing of his Raphael. It is a 1913 photostat printing of a manuscript copy made by Christian Grumbach in 1729. It includes 4 plates not included in any other printing of Raphael. It is thought they were simply slipped into the manuscript for safe keeping and mistakingly printed as part of Raphael.

The one related to the above is his 'Tabula Universalis Theosophica Mystica et Cabalistica'. It is Franckenberg's depiction of the "plate of brass' on the altar in the crypt of C.R.C. as mentioned in the Fama Fraternitatis:

In the midst, instead of a tomb-stone, was a round altar, covered with a plate of brass, and thereon this engraven:--
A. C. R. C. Hoc universi compendium unius mihi sepulchram feci.
Round about the first circle or brim stood,
Jesus mihi omnia.
In the middle were four figures, inclosed in circles, whose circumscription was,
1. Nequaquam Vacuum.2. Legis Jugum.3. Libertas Evangelii.4. Dei Gloria Intacta.

It's pretty easy to see how the geometry explained above was used to layout the main image: 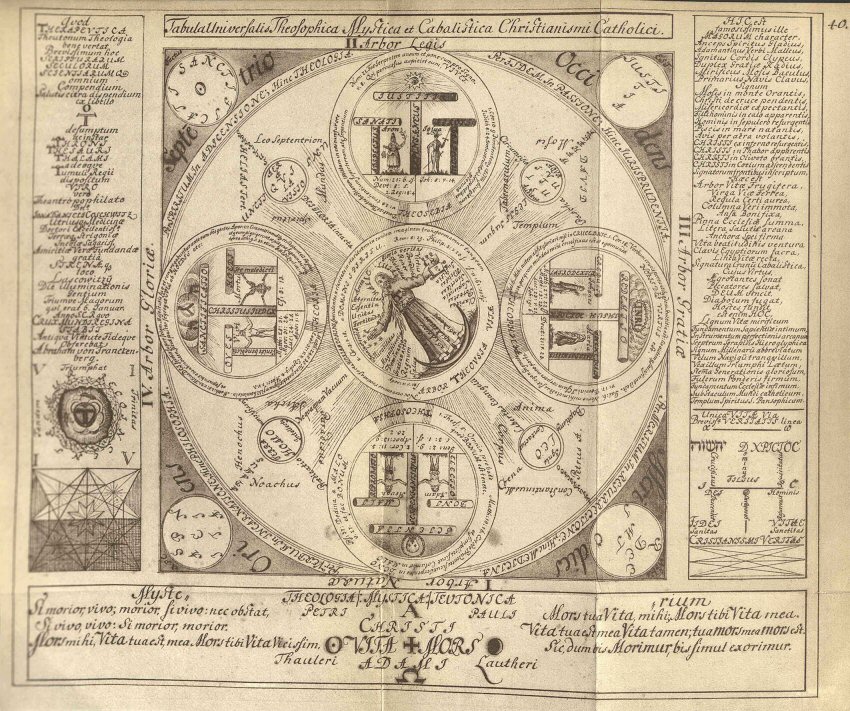 I found references to this in 'Divine Wisdom, Divine Nature: The message of the Rosicrucian Manifestoes...' edited by Jose Bouman and Cis van Heertum, and published by the former Ritman Library. I was excited when I saw the title "Abraham von Franckenberg: geometry, the rose and the vault", except it contains almost no geometry. It's concerned with the "rose" and geometric shape at the bottom right of the plate: 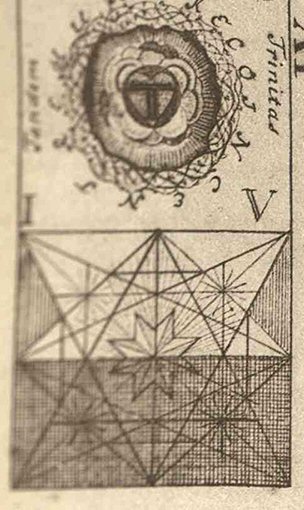 'Divine Wisdom' contains this description: "The geometrical figure below the rose is obviously an attempt to copy the vault containing Rosenkreuz’ tomb according to the geometric specifications in the Fama."

This is the description of the crypt from the Fama:

In the morning following we opened the door, and there appeared to our sight a vault of seven sides and seven corners, every side five foot broad, and the height of eight foot. Although the sun never shined in this vault, nevertheless, it was enlightened with another sun, which had learned this from the sun, and was situated in the upper part in the center of the siding.

This is all clear and bright, as also the seventh side and the two heptagons. So we kneeled down altogether, and gave thanks to the sole wise, sole mighty, and sole eternal God, who hath taught us more than all men's wits could have found out, praised be His holy name. This vault we parted in three parts, the upper part or siding, the wall or side, the ground or floor. Of the upper part you shall understand no more at this time but that it was divided according to the seven sides in the triangle which was in the bright center; but what therein is contained you (that are desirous of our Society) shall, God willing, behold the same with your own eyes. Every side or wall is parted into ten squares, every one with their several figures and sentences, as they are truly shewed and set forth concentratum here in our book. The bottom again is parted in the triangle,

The geometry does not resemble this. It is based on 4 and 8, and there's no heptagon anywhere.

If you take the 9 nodes from the centers of the 9 circles we drew above, and connect them all together, this is what you get: